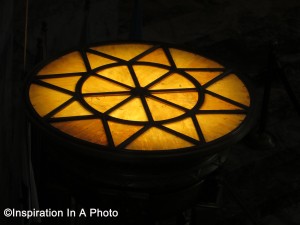 One of the cool things about where I work are the Roman-like torches that are featured in one of the buildings. They are large, gold in color, and feature several columns supporting a cauldron. As I walked up to the upper level of the building, I looked down from the walkway and was amazed at the pattern on the cauldron. It was a beautiful sunburst pattern that complemented the space and created a pop of color among the grey marble stone. A similar photo would be a great addition to a space that was predominately made up of neutral colors. The dark background and yellow of the sunburst creates a beautiful contrast that will create a focal point in any space. Don’t have any torches to photograph? Go to your local craft store and create a similar look with paper, paint, or a combination of mediums. With a bit of searching and crafting, you can have a beautiful sunburst to brighten your space!